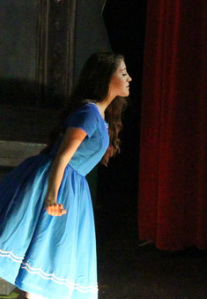 Photo by Moon Yang.
When I was eleven , I had the opportunity to be in “Peter Pan” in North Alabama’s program… it was a magical experience,” said Olivia Mitchell. It was her first time on stage. It became the origin of the Blackberry Little Theatre’s program for kids up to twenty-one four years later. She now also teaches kids under the age ten in summer workshops. In Fort Payne, AL, she runs summer theatre tours, produces three shows, and manages up to sixty kids!

More and more kids have been here about the Blackberry Little Theatre. “The size of the program has gotten bigger and bigger.” According to Olivia, “ [They] have about 50% homeschooled and 50% in public schooled.”

The kids not only act, but they also are put into technical theatre (costumes, lighting, sound, etc.) “The kids are usually from the area or from the surrounding towns.”.

“The kids have been involved in several productions.” she said.  Previously, she produced “A Little Princess” - 2009, “The Hunchback of Notre Dame” - 2010, “The Prince and the Pauper” - 2011, “A Midsummer Night's Dream” - 2012, “The Lion, The Witch, and the Wardrobe” - 2013. This year,  the Blackberry Little Theatre is producing “Alice in Wonderland.” They had actually gone out of Fort Payne to tour around Alabama. 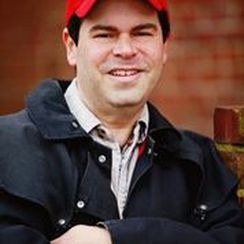 With two published books and one in the making, Greg Starnes has acquired much fame and praise for his writing. Set in the quaint area of DeKalb County, Starnes’ first book “Hollers From The Hollows” compiles recollections of ghost stories and UFO sightings that were retold by people in the community.

A work like his had never been created, and he believed that the area should have many stories.

“I believe that history and haunts go together,” Starnes said of his work.

After mass recognition, Starnes wrote a second book “A Secessionist Christmas Carol,” a Civil War twist on the classic Christmas story by Charles Dickens. It is set in Columbia, South Carolina, on Christmas Eve1860; the day South Carolina ratified its ordinance to secede from the Union.
Read More

Poised for a Comeback 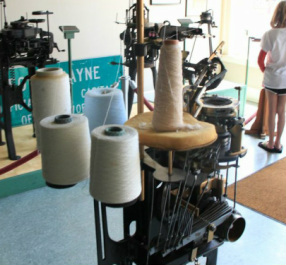 Photo by Eric Taunton.
Throughout Fort Payne, Alabama, old and abandoned textile mills stick out of the town like cold sores.

Trucks are still parked at the old buildings, as if they are ready ship the next batch of textiles across the country.

But the trucks are rusted and long silenced, and the one-story brick buildings abandoned with weeds taking over. That’s a great contrast to what once was when Fort Payne was proudly known as the “sock capital of the world.” The decline of textile manufacturing in the U.S. also brought the decline of the once-bustling textile north Alabama town.

“We’re still in business, but a lot of that business has moved offshore,” said John Dursham, the president and CEO of DeKalb Tourism in Fort Payne. “It, like many other American industries … found a lower cost of labor elsewhere.”
Read More

The Spot to Be 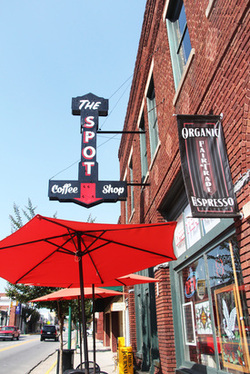 Photo by Moon Yang.
FORT PAYNE--Don’t let the name fool you, The Spot is more than a coffee shop. On the streets of Fort Payne lies an eclectic masterpiece woven into different threads of food, drinks, arts and music.

Even before stepping into the antique building on Gault Avenue, the exterior intrigues passersby with a definite contrast from its surroundings. The black and red sign with a huge arrow pointing down at the bright red parasol umbrellas immediately draw attention and provide an easing atmosphere. The overall ruddy appearance well presents the passion of The Spot’s founders, Justin and Lori Sweeney, while raising anticipation even more.

The interior is pleasant and entertaining at the same time. It is a well-blended mixture of the vintage ‘50s, gothic and modern decorations, all assimilated by the owners. Starting from the ceiling that Justin scraped down to make it look antique to the gothic cathedral lightings, all are put together by the delicate effort of the Sweeney couple. The walls are covered with numerous art works that were created by local artists, including James Dean, a well-known creator of “Pete the Cat” artwork who was born in Fort Payne. In different corners, classic motorcycles and bicycles are displayed as subtle mood setters. The loft at the back of The Spot, accented with strong red paint on the walls, supplies liveliness that the white walls on right and left somewhat lack.
Read More

A JUST REWARD: Mentone Police Chief Lamar Bray poses with a police SUV donated by the three summer camps that take place each year in the town. The summer camps attract more than 1,000 visitors each year, nearly quadrupling the population of the North Alabama tourist town. Photo by Savannah Bullard.
MENTONE—This is a sleepy little hamlet nestled in the North Alabama hills, and that’s just the way Police Chief Lamar Bray likes it.

Bray spent the majority of his career with the DeKalb County Sheriff’s Department before transitioning to the Mentone police force.

“This is my ninth year,” he said. “It’s just a pleasure to come to work every day. You’ve got to give credit where it’s due though; it’s the people. They obey the law, and it’s kind of like not having a real job.”
Read More 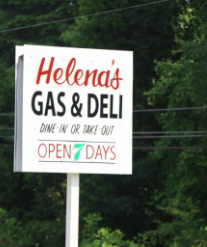 Photo by Tres Harrison.
At first glance, you may not notice it.

Yet Helena’s Gas and Deli in Mentone is a restaurant with a small menu but a big taste.

The average driver passing through Mentone on highway 117 might not expect much from a restaurant connected to a gas station. Most would likely pass it without even a second thought.

Helena’s is a small, lean-to attached to a gas station next to Mentone Town Hall. But once you experience it, the food and décor will stick with you.

The clunky television hangs in the corner and plays college baseball. Its volume is a low mumble in the background of local conversation.
Read More 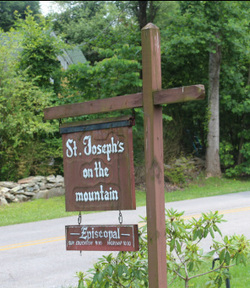 Photo By Arniece Ibezim.
Ann Chestnut passes through the town of Mentone every morning to drop her daughter off at school.

As she passes by St. Joseph’s On-the-Mountain Episcopal Church, she slows down.

Her daughter asked her why.

“Well you have to, it’s a community,” Ann said.

Years ago, Ann joined a church in Scottsboro, but the congregation wasn’t friendly. So she left the church.

For a while, she was churchless, but her desire to attend regular worship services never faded.
Read More

Photo by Lily Cole.
MENTONE—The Mentone Springs Hotel is a total loss. The historic 57-room hotel, built in 1884, burned to the ground Saturday night, leaving nothing but the chimney’s ornamental stone standing in the smoky rubble.

No one was injured in the blaze.

“There were only 8 guests in the hotel at the time the fire started and everyone made it out safely with no injuries or casualties,” Mentone Police Chief Lamar Bray said. “Having a fire is like losing a family member and that’s kind of how it was.”
Read More

The Story of Storytellers

Photo by Kendall Mayes.
Every time publisher Ben Shurett prints a story he knows the phone will ring the next day. The Sand Mountain Reporter is a smaller than usual publication in Albertville, Alabama.

Shurett with the help of reporters including Malarie Allen and Elizabeth Summers cover a wide variety of topics in the Albertville region.

Summers said that the duty of a journalist is to report all sides of the story, to be impartial in telling the story and get the people talking.

Columnist Jonathan Stinson discussed the controversial history between Hispanics and the area in relation to the paper. He has been learning Spanish as the paper worked hard to mend the relationship between the paper and the Hispanic community.
Read More

'We may be small, but we are a community'

Upon first arriving at Gorham’s Bluff, this large quaint lodge, built in 1995, will greet you. Photo by Ally Minker.
By Ally Minker
Among the twists and turns of the roads in the small town of Pisgah, Alabama resides a small family run inn and community known Gorham’s Bluff.

Gorham’s Bluff is a quaint, 186-acre community that lies on a hill overlooking the Tennessee River. Clara McGriff, current owner of Gorham’s Bluff, has been helping run the family business since she was young. McGriff helped to recount the detailed history of the small village.

It all began with Civil War veteran, Billy Gorham, who founded the  community in the 1890s. While trying to start a business in the sleepy north Alabama town, his wife and two children tragically left him. Shortly after, Gorham died of unknown causes and he left no family to claim his estate or new enterprise.
Read More

Photo by Allison Smith.
Nestled between the backcountry of northeast Alabama and the banks of the Tennessee River is a quintessential southern community of white farmhouses, green grass, and tree-lined streets.

Settled among the deteriorating barns of Jackson County and tractor-dotted County Road 457 lies Gorham’s Bluff, a vacation home community that was hit hard by the recession. But the area has found new life as a travel destination.

Originally, this planned community was a small town that consisted of vacation and starter homes. But this dream of the McGriff family, who has owned the property for four decades, was unraveled by instability in the housing market beginning in 2008.
Read More

Store-N-Deli Known for Atmosphere and Cheeseburger 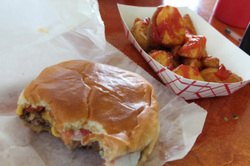 Photo by Taylor Armer.
SCOTTSBORO—Don’t ask the address. Folks here will tell you the Pikeville Store-N-Deli in the center of two back roads. You’ve just got to find it for yourself.

And a lot of people have.

Pikeville finished second in the AL.com Best Burger Contest, losing out to Vicky’s Lunch Van in Montgomery—by three-tenths of a point. But locals will tell you there’s nothing like a burger from this former gas station.

“I go to church with the owners,” said Carolyn Staton, a regular at the restaurant. “I love coming to see the people, and the food is delicious.”
Read More 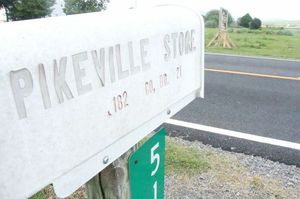 Photo by Chandler Carter.
Nestled between two streets at a fork in the road in Scottsboro, Ala. and surrounded by cornfields, has stood Pikeville Store-N-Deli since 1993, an old-fashioned general store with a small restaurant attached to the back.

When Connie and Dwight Wilkerson first opened the business, they had no idea it would grow into what it became today.

Tourists and regulars alike have praised the Wilkersons establishment for their food and atmosphere.

“It’s the best place in the country,” Ronnie Gamble, a regular at the restaurant, said.

During lunch from Tuesday to Saturday, Pikeville is packed with people waiting to enjoy its famous cheeseburger, which was nominated by AL.com for the best in the state
Read More